How Do Pheromones Affect a Female’s Menstrual Cycle?

A woman’s menstrual cycle can be altered by the pheromones transmitted by either males or females. This chemical signal can cause her cycle to become synchronized, shortened, or lengthened. The male pheromones which affect females are the primer pheromones. Many studies have been conducted on different mammals to explain the affects pheromones have on female mammal’s menstrual cycles.

What Studies Have Been Done to Prove This?

One study experimented on female boars in which male boar urine was rubbed on the female boar’s snout. This caused her to stand in the mating stance, just as if the male boar was standing near her. (Grammer, Fink, & Neave, 2004)

Research on rodents’ chemical communication systems is the most common in laboratories. Female mice are mammals that are easily influenced by male mice pheromones. (Johnson, 1989) Male mice pheromones can revolutionize female mice since the ovulation of female mice is regulated by the pheromones in male urine. In research, it has been shown that when there is no male present, the female’s estrous cycles are not in synchronization. On the other hand, when the male is present, the females become synchronized. Puberty can also be influenced by the presence of male urine. Female mice will begin their oestrous cycles early if introduced to male mice urine early. Mice can determine the dominant male by the signature odor in the present urine.

How Are Female Humans Influenced by Male Human Pheromones?

Human females are easily influenced by human male pheromones; a woman’s menstrual cycle can be regulated by a man’s pheromones from his perspiration. One example is the research conducted by Cutler. Cutler applied male perspiration to the upper lips of women. Through his research, he came to the conclusion that males can cause a woman’s menstrual cycle to become regular – occurring every 28 days. Cutler also concluded, “The male essence seemed to substitute for regular weekly sex” (Kodis, 1998, p.89). Whether or not a woman ovulates is a direct result of the presence of male pheromones. (Kodis, 1998) In her book, The secret language: Pheromones in the animal world, Rebecca Johnson (1989) states:

Women who are celibate do not ovulate during every menstrual cycle – in fact, they ovulate only about half the time. Women who have contact with men, however, ovulate 90% of the time, and their cycles become more regular. (p. 292)

This is further proof that females’ menstrual cycles are influenced by the pheromones of men.

What about Young Girls’ Menstrual Cycles?


Young girls can also be affected by male pheromones. There was a study conducted by Ellis and Garber to show that young girls start puberty earlier if the father or stepfather is in their everyday lives. Girls from single-mother households started puberty later than the girls with fathers or stepfathers. Male pheromones create early puberty in young girls and regulate mature women’s menstrual cycles. (Grammer et al. , 2004) 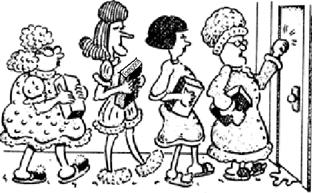 Pheromones of women can also manipulate other women’s menstrual cycles. Women release two primer pheromones: one prior to ovulation and one after ovulation. The pheromone released prior to ovulation causes the menstrual cycle to speed up the arrival of ovulation in other women while the pheromone released after ovulation causes delay in the arrival of ovulation in otherwomen. A woman’s menstrual cycle can be synchronized with another women’s menstrual cycle by the presence of that woman. Martha McClintock and Kathleen Stern conducted a study that showed that women would synchronize their cycles with the cycles of the other women that they lived with. There were 29 women; nine women donated pheromones and the other 20 were recipients of the pheromones. In this study, gauze were placed in the donor’s armpits to obtain the samples of sweat. Placing alcohol on the gauze pads preserved the sweat samples. These gauze pads were cut into fours and frozen. The samples were then given to the 20 recipients to apply on their upper lips for four months. The recipients received two sets of samples: Oneset of samples for the first two months and the other set of samples for the second two months. (Seppa, 1998) The results were as follows:

Another similar study was conducted in 1980, by Russell, Switz, and Thompson. This study used 1 woman donor and 16 recipients. Eight women received the gauze with the pheromone and the alcohol. The other eight women received the gauze with only alcohol. The women dabbed their lips three times a week for four months with the gauze. The 16 recipients were not told which gauze had sweat on them. The results to this experiment are as follows: eight women became synchronized with the donor and the other eight women still had random menstrual cycles. (Johnson, 1989)