How Are Pheromones Used?

The bond between a mother and her child are much deeper than just emotional heart strings. Pheromones are exchanged in the womb, through breastfeeding, and through other means of physical contact which create a lifelong bond between mothers and their children. Both humans and nonhumans use pheromones as a means of nonverbal communication and maternal ties.

Pheromones also serve as identifiers. Mothers and children can recognize each other by the pheromones each emits.

Fawns use these pheromones to identify their mothers among the female deer in the herd. A fawn may sniff the tarsal glands (located on the insides of the knees of the rear legs) of a number of females before finding the correct one. (Johnson, 1989, p.27)

The pheromones that allow these fawns to recognize their mothers are the chemical make up that they learn while still nestled in their mothers’ womb.


Where Does the Bond Begin?

Pheromones begin their mother-infant connection before the baby is ever born. While children are in the womb, they begin recognizing their mother’s pheromones:

While hugged in the cozy, wet warmth of the womb, the fetus uses pheromones to communicate with its mother in a quiet code of chemical signals. This chemical link survives the baby’s birth so that a mother can identify her infant not only by his smell but also by his pheromones. Pheromones also help guide the infant’s mouth toward the nourishment of his mother’s breast. (Kodis, 1998, p.13)

The olfactory sends messages to the growing fetus so that by the time the baby is born, he or she has spent the past several months getting to know the mother’s pheromone chemistry.

What Role Does Breastfeeding Play?

Breastfeeding plays a major part in the passing of pheromones from mother to child. It does not take a child very long to learn and become partial to his or her mother’s pheromones. “At six days – some researchers say three days – awake babies can discriminate between their mother’s breasts and strange women based solely on their pheromones” (Kohl & Francoeur, 1995, p.78). While human babies have two breasts from which they are nursed equally, other nonhuman babies have several nipples to choose from and some will even favor one nipple over the rest. “Kittens nurse at one nipple only, having identified it by its unique scent” (Kohl & Francoeur 1995 p.79). Nonhuman babies rely so heavily on the scent of their mother’s nipples that if the scent were to change, the babies would die. “Instinctively a mother rat licks her nipples, unknowingly applying a salivary scent that guides her blind, hungry newborn to her breast and milk. Wash the nipples and the newborn pups lose their way and die of starvation” (Kohl & Francoeur, 1995, p.128). In this relationship, it is imperative that a baby can recognize his or her mother’s pheromones and that those pheromones remain the same.

Which Glands Are Involved?

Not only are the pheromones associated with breastfeeding important for a baby’s survival, breastfeeding also allows the baby to be exposed to his or her mother’s underarm pheromones. “Nursing at the breast exposes the infant to maternal pheromones from apocrine and sebaceous glands in the underarms and in the dark tissue around the nipples” (Kohl & Francoeur, 1995, p.79). These glands have secretions which make up a person’s body scent when mixed with bacteria living on the skin. “After birth, bacteria on the infant’s skin convert the adrenal androgens from the sebaceous and apocrine secretions into the characteristic body odor of newborns” (Kohl & Francoeur, 1995, p.142). Also, during pregnancy, these glands ensure that the infant fully develops.

At birth, male babies get a surge of GnRH which results in a LH surge. This is apparently triggered by exposure to the mother’s pheromones. The LH surge keeps the testes pumping out a high level of testosterone which further masculinizes the brain by destroying or altering connections between nerve cells and creating male circuits. (Kohl & Francoeur, 1995, p.96)

The pheromones secreted from these glands helps form humans internally as distinctively male or distinctively female. This is also pertinent in forming mate selectionideals.

How Do Pheromones Influence Infants?

A breastfed infant reaps more benefits than just being able to recognize his or her mother’s breast pheromones. “Breast-fed infants also recognize their mother’s underarm pheromones, while bottle-fed do not” (Kohl & Francoeur, 1995, p.78). Breastfeeding can influence what a child will look for in a mate when they are grown, as is demonstrated in this study of rats:

Fillion and Blass (1986) found that in male rats, odors associated with the mother during nursing heavily influenced sexual attraction in adulthood. These workers gave some nursing mother rats the odor of lemon while other retained their natural odors. Males that as pups had nursed the lemon-scented mothers preferred to mate with lemon-scented females. It appears that in many species, exposure to particular odors early in life produces lifelong preferences for these odors. (Hughes, 1999, p.293)

Just as the baby rats would die of starvation if their mother’s scent was changed by washing her with soap, so also their mate preference can be manipulated by solely allowing them to be familiar with the scent of lemon. But this does not apply to rats alone: “After mothers apply a perfume to their breasts before nursing for a day or two, infants between one and two weeks old appear to prefer the familiar scent” (Kohl & Francoeur, 1995, p.77). While changing the mother’s scent does not cause a human baby to starve, it does change the scent that the baby prefers. 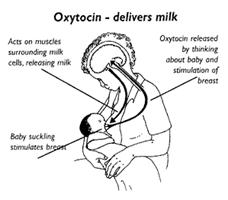 There is a chemical known as oxytocin which, according to Michelle Kodis, is the “cuddle chemical. ” (Kodis, 1998, p.96) “When a mother hears her hungry baby cry, oxytocin intervenes, making her nipples erect and ready to pass the stream of milk so desired by the infant” (Kodis, 1998, p.96). This response ensures that the mother wants to nurse her baby as much as the baby wants her milk.

How Do Pheromones Benefit the Mother?

Pheromones are not only for the benefit of children; mothers also rely heavily on the unmistakable pheromones of their offspring. “Odors help nonhuman and human mothers bond to and identify their own infants. Human mothers, for example, regularly brush their noses into their baby’s hair so they can inhale its sweet odor as they cuddle it” (Kohl & Francoeur, 1995, p.128). In situations where all babies look alike, as in a litter of rats, pheromones indicate to a mother rat which babies are hers. “Mother rats identify their young by smell and can pick their own offspring out of another litter” (Kohl & Francouer, 1995, p.79). 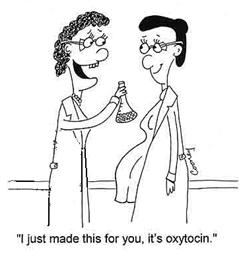 Since babies are unable to care for themselves, pheromones signal to nonhuman mothers that they must take care of their babies. “After a ewe gives birth and nuzzles its newborn lamb, a chemical reward, a bonding hormone known as oxytocin, released in the mother’s brain tells her, ‘This particular lamb’s odor is important. Pay attention to it'” (Kohl & Francoeur, 1995, p.128). If it weren’t for this chemical bond, many nonhuman mothers may give birth and then go off and leave their young. It is also because of pheromones that mothers go into labor and feel the need to nurse. “Oxytocin stimulates the contraction of the smooth muscle of the uterus during labor and (…) facilitates milk flow during nursing” (Kodis, 1998, p.96).

How Long Can the Pheromone Bond Last?

This bond between a mother and child created by pheromones is not limited to a mother and her infant. It is a lifelong tie that cannot be broken. Below is a phenomenal story of the extent of this pheromonal bond:

A woman was visiting Oxford, England, when she found her world turned on end. She was standing by a river when a group of young male students walked by. As the boys passed, the woman had the unmistakable and instant feeling that one of these youths was the infant son she had given up for adoption only a few hours after his birth. The young man said later that he had experienced a similar visceral, gut reaction to the female “stranger” standing by the water. As he walked by, a thought flew into his brain: That’s my mother! (Kodis, 1998, pp.12-13)

The thing that makes this story even more amazing is that, according to Kodis (1998), there were no physical similarities that could have signaled to either person that the other might be related to them. It was strictly on the pheromonal bond created in the womb between this mother and her child that they recognized each other as mother and son.

The mother-infant bond produced by pheromones is one that begins in the womb and is carried out as long as both mother and child are alive. While humans do not generally readily admit the work of pheromones in their lives, not wanting to admit any animalistic characteristics, it is hard to dispute that pheromones are just as active in humans as they are in nonhumans. From an infant identifying his or her mother’s scent when only a few days old, to a youth who identifies a mother he never knew, pheromones are constantly at work within all of us.

3 thoughts on “Mother-Infant Bonding: The Science of Smell”