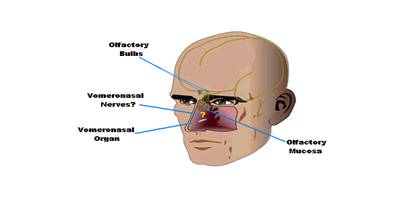 The definition of a pheromone, according to the Oxford dictionary, is: “a chemical substance secreted and released by an animal for detection by another usually of the same species. ” Basically, pheromones are chemical messengers that activate physiological or behavioral responses in other like organisms. In most mammals pheromones are detected within the vomeronasal organ (VNO). In human beings, however, it is hypothesized that they are detected and processed in the olfactory bulbs within the brain. The olfactory bulbs are located near the hypothalamus, which is the part of the brain that controls sexuality.


Pheromones are actually modified hormones or molecules used in trace amounts in order to control bodily functions ranging from cell-cycle regulation to production and release of other chemicals and proteins. Most importantly, they are hormones responsible for the behavioral responses of individuals – sexual behavior included.

Where Are Pheromones Found? 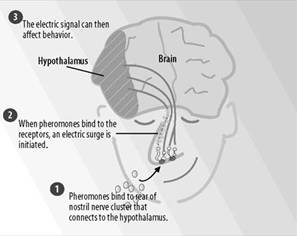 Pheromones have been isolated in saliva, sweat, and urine of different species, including humans. Most mammals have a specific organ for the detection of pheromones; however, it has not yet been assessed whether the pheromonal communication depends solely on that organ. While “odorant detection is mediated by millions of olfactory sensory neurons located in the olfactory epithelium lining the nasal cavity” of the first olfactory system, “the vomeronasal organ, a separate olfactory structure in the nasal septum that opens into the nasal cavity” mediates the pheromone perception in the second olfactory system (Buck, 2004, p. 184). These two systems are very similar to each other.

It is proposed that humans can detect around 10,000 different odors and which is accomplished with the use of around 350 odorant (olfactory) receptors ,or ORs (Buck, 2004, Kien & Storm, 2004). ORs are transmembrane proteins embedded in the cell membrane of the sensory neurons or the olfactory epithelium. These transmembrane proteins are coded in the DNA and several studies show that “each neuron may express only one gene,” therefore only one type of an OR is found in the cell membrane (Buck, 2004, p.184).

How is it that humans only have 350 odorant detectors but can detect over 10,000 different compounds? The answer is that the 350 ORs have additive effects. Each OR binds to a specific chemical or odorant molecule which causes a cascading sequence of events within the cell

… one OR can recognize multiple odorants and that a single odorant is detected by multiple ORs, but, importantly, different odorants are recognized by different combinations of ORs. This indicated that the OR family is used in a combinatorial manner to encode odor identities. (Buck, 2004, p.185)

The combination of activation of several of the 350 ORs encodes a particular odor which is then passed trough the olfactory bulb to the olfactory cortex.

The second system that uses the VNO has a similar processing pathway. There are between 120 and 140 receptors in the VNO in mice – significantly less than around a 1,000 found in the olfactory epithelium of mice (Buck, 2004). This is a general trend in most mammals. There are usually two families of receptors: V1Rs and V2Rs – vomeronasal receptors which are not to be confused with the olfactory receptors. These receptors are similar in form and function to the ORs and can detect a variety of chemicals. Once pheromones are detected by vomeronasal receptors “sensory signals are relayed from this organ [VNO] through the accessory olfactory bulb and then targeted to the medial amygdala and hypothalamus, areas implicated in the hormonal and behavioral effects of pheromones” (Buck, 2004, p.184). One major difference between the two systems is that while a few of the vomeronasal neurons equipped with VRs can detect more than one pheromone, most neurons that can detect only one pheromone – a single receptor-type pheromone indicating a lock and key mechanism (Buck, 2004, Von Campenhausen, 2000).

How Many Types of Pheromones Exist?

Releaser pheromones are generally associated with sexual attraction. Primer pheromones affect the development or reproduction physiology, including puberty, cyclicity in females, the success or failure of pregnancy, and shifts in hormone levels (Wysocki & Pereti, 2004). It has been hypothesized by Wysocki & Pereti (2004) that in other mammals, if a female is exposed to male pheromones from a male other than the one who impregnated her, primer pheromones can cause the pregnant female to spontaneously abort the fetus. Signaler pheromones allow human mothers to recognize their newborns by scent alone. Fathers who attempt this sameprocedure fail. The signaler pheromones give us our genetic odor print, which is as unique as a fingerprint. Modulator pheromones, in the form of sweat, when placed on the upper lip of females shifted the mood of the subject. They were more relaxed and less tense than the control group, and they also have an impact on women’s monthly cycle.

Of these four types of pheromones there are also four specific functions of pheromones: opposite sex attractants, same sex repellents, mother infant bonding, and menstrual cycle modulators. Pheromones activate specific regions within the brain. They affect social behavior, regulate ovulation, and modulate physiological parameters such as the serum levels of testosterone, luetinizing hormone and follicle stimulating hormone. Pheromones have also been shown to affect respiration and cardiac frequency in a gender specific way (Beier, K. , Ginez, I. , & Schaller, H. , 2004).