James Walter Thompson, a Marine Corps veteran from Massachusetts born in 1847, began as an effective salesman for an ad agency by the name Carlton & Smith. In 1878, Thompson bought the company for $500 and renamed it J. Walter Thompson.


His focus began as he offered full service to clients, from the creation of ads to the publication. He is considered the father of magazine advertising in America. He later opened offices in Chicago, Boston, Cincinnati and London. Among the inventive stuff he created are giveaway items such as inkpots and pin boxes emblazoned with his company. He also created a promotionnal method known as, “house advertisements.”

Thompson’s successor was Stanley Resor, he built the largest and most dominant agency in the industry. Of his earliest clients who are still with him one can name brands such as Ford and Kraft. He remained President of the agency until 1955 when he retired. In 1987, WPP Group purchased JWT.

Timeline of the advertising world

In 1841- Volney B. Palmer opens the first American Advertising Agency in Philadelphia.

1856 – Robert Bonner is the first to run a full-page ad in a paper, advertising his own literary paper, the New York Ledger.

1861 – There are twenty advertising agencies in New York City.

1870s – In response to the high volume of outdoor advertising (including posters and signs painted on rocks, buildings and barns) in cities and rural areas, several states begin to impose limitations to protect natural scenery from sign painters.


1891 – Nathan Fowler, in Advertising Age, recommends that because women make most of the purchasing decisions of their household, manufacturers would do well to direct their advertising messages to them.

1893 – The Royal Baking Powder Co. is estimated be the biggest newspaper advertiser in the world.

1890s – Advertisements for alcohol – wines, liqueurs, and whiskeys – are placed in popular national magazines, such as Harper’s Weekly.

1890s – Women are depicted outside the home in a non-domestic setting for the first time in bicycle ads.

1904 – Sapolio soap becomes a popular name brand and an early example of the growing influence of advertising campaigns on public consumption.

1907 – Bull Durham tobacco ads on New York City Fifth Avenue buses and trolleys cause a commotion due to the “male-obvious” depiction of the bull in the ads; the drivers are arrested and the pictures confiscated due to the offensive nature of the illustrations. The legal case eventually goes all the way to the Supreme Court.

1910 – $600 million is spent on advertising by big business; this represents 4% of the national income.

1916 – James Walter Thompson retires at 69 and sells his agency to Stanley B. Resor and partners.

1917 – The American Association of Advertising Agencies is formed.

1918 – The first test kitchen in an ad agency is created in the Chicago office of the J. Walter Thompson Company. 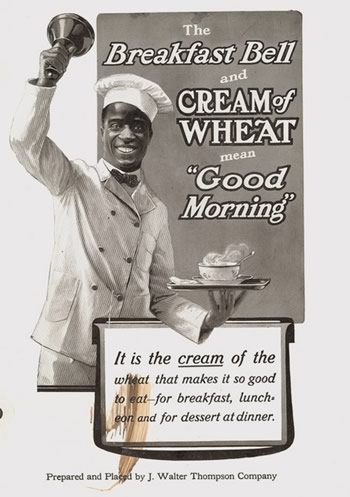 Packages that speak out

This indicates the beginning of advertising, when the product with a clear and big name got all attention 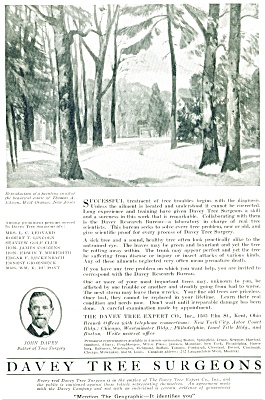 Headline:
How John Davey became “The Father of Tree Surgery”

This is a promotional ad where only good things are said about the protagonist, this, more than advertising is PR.

Headline:
A line with two names and five distinct markets

Ironically, there used to be a great market promoting fire arms.

Headline:
The Edge of the Circle

This 1923 ad proves that the message is not clear nor accurate. The agency faults in showing that they can reach a mass audience by placing as an example the divesting reality Native Americans went through. They see it as a peace treaty when really it was pure genocide.

The role/ impact of the media in the creation/ history event. How did the particular medium play role.

Is clear that media has impact in the creation and evolution of the history events, by this time for a product to have success has to be promoted by the media otherwise it not known so the chances to have luck in the market is very little. The company that created the product only concentrate in making the product they don’t worry in how is going to be known or sale, they live this to publicities companies that work directly with the media.

We are getting to a point that the media causes so much influence in getting to know a product, and making sales happens, that it is almost a requirement if you want to sale a product to be in television, commercials, etc, everything that has to do with public advertising, of course this is getting to a limit that it is almost unaffordable presenting the product to the media, is so expensive that they count second by second when they talk about presenting their product on air, and once again we are talking about having money and not about if it’s a good or a bad product. It doesn’t matter if is a bad product if the company that promotes it have the money to pay advertising the media is going to show it, so is the media really doing their job?…

The exigency at the nation at the time of the event. Other things that were happening

First no one really knew what the benefits off the media were, people dint’ really believe in it, after a few years it was the MOST IMPORTANT way of advertising and the competition of brands in the nation started. So it was an exigency that people were involved with the media if they wanted to be part of society, and that’s how it works right now, if you want to be actual and informed people have to be in constant contact with the press, television radio etc…

In the other hand the media during the time is causing a lot of hate between companies and products specially in the US were publicity against other products is allowed, we are living in times that is essential to the first ones informed and to be the first ones in the market so everything is about winning a race and not about being informed.