What Does Science Have to Do with Mate Selection?

When thinking about mate selection, rarely do thoughts turn to science and biology, although both are shown to play an important part of mate selection. There are no romantic comedies called Love at First Sniff or articles in Cosmopolitan entitled: How to Get the Best Body Odor. But as research shows, noses provide many biological mating cues. Some of these are found in the form of pheromones.


Humans’ sense of smell has by far been underestimated in the past. Like other animals, “humans use olfactory signals for the transmission of biologically relevant information” (Grammer, Fink, & Neave, 2004, p.141). Researchers investigating body odors have speculated that pheromones are key in mediating socio-sexual effects. “Pheromones, which are ubiquitous among animals, have only recently been seriously considered as signals in human mate choice” (Cornwell et al. , 2004, p.635). Researchers are still at odds about where pheromones are interpreted within humans, though Wysocki & Pereti (2004) believe that the olfactory system detects and interprets pheromones.

How and Where Does the VNO Function?

The VNO has been shown to detect pheromones in other species. Some researchers believe the VNO does not exist in humans, while others believe it does exist in humans but does not function as it is understood to function in other species. Grammer et al. (2004), on the other hand, theorizes that humans do possess a functional VNO which responds to pheromones in sexual-specific manners. The only commonly agreed upon fact regarding the VNO is that it is visible and functioning in the fetus. Yet researchers disagree about whether it shrinks or entirely disappears after the fetus is born.

While the VNO is a controversial subject, the majority of research shows that it is important to the processing of pheromones. The VNO is located above the hard palate on both sides of the nasal septum and it is lined with receptor cells whose axons project the accessory olfactory bulb, which sends its projects to the hypothalamic nuclei (Grammer et al. , 2004). 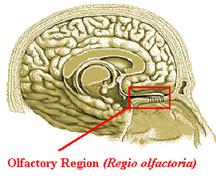 It is also believed that “the VNO system, through its close connections with the reproductive hypothalamus, is the primary pathway for bringing about neuroendocrine changes – the kind involved in puberty acceleration, estrous inductions, and pregnancy block” (Keverne, 2004, p.177). Keverne (2004) also states that the VNO links directly with limbic brain structures, which are important for the development and expression of primary motivated behavior (sexual, aggressive and maternal behavior). These behaviors are linked with reproduction. Other research suggests that the olfactory is where pheromones are detected and processed. The strength of this argument comes from the biological functioning of the ORs, which Grammer et al. (2004) suggests send projections to the neocortex for conscious processing (e.g. the nature of a particular aroma) but also to the limbic system for emotional processing” (e.g. memories and affect associated with a particular smell. )

How Do Humans Assess Mate Quality?

In humans, it has been known for some years that “the olfactory receptor genes are expressed in the testis and appear to be functionally linked to the Major Histocompatibility Complex (MHC) on various chromosomes” (Keverne, 2004, p.185). The MHC helps the body to recognize its own healthy cells. Humans have the largest MHC/olfactory receptor-linked cluster of any organism so far investigated. 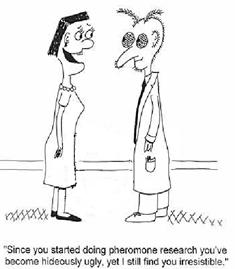 Some researchers believe that our vision may have taken over for the VNO. According to Grammer et al. (2004). , the visual stimulus is important in socio-sexual contexts, but when personal intimacy is increased, it is likely that smell also plays a key role in a variety of socio-sexual behaviors. Together our vision and our olfactory receptors help us today to make mate selections. Grammer et al. (2004) suggest that humans use multiple signals as a way of reducing error when assessing mate quality. Pheromones are a biological measure to help reduce error.

Up to this point, human pheromones have been known chemically as volatile steroid molecules (Beier et al. ,2004). The most studied steroid within humans is called 4, 16-androstadien-3-one (AND) is found in secretory epithelium. Apocrine glands develop in the embryo, but become functional only with the onset of puberty. At sexual maturation, these glands produce steroidal secretions derived from 16-androstenes via testosterone. AND is significantly higher in males than females. (Grammer et al. , 2004) “The apocrine glands and AND work together to correlate structure and function with approaching sexual maturity and do not begin their secretory activity until puberty” (Beier et al. , 2004, p.61). Beier et al. (2004) hypothesizes that there is a direct link between androgen action and induction of pheromone production in the aprocrine glands of the human axilla.

High concentration of apocrine glands found in the armpits led to the term axillary organ (Grammer et al. , 2004). This is considered an independent organof the human odor production. Axillary secretions and odorants are centralized in areas where hair and sweat can be found together. The centralized point in men is positioned at the nose level of average-height women – men’s arm pits. When apocrine is first secreted, it is odorless, but it is then transformed by bacteria.

How Does Ovulation Affect a Woman’s Sense of Smell?

At the time of ovulation females’ smell sensitivity peaks and female subjects found androstenone to be more pleasant and appealing than at other times during their cycle. These results suggest that there is a recordable change in the emotional evaluation of males, and this could be triggered by androstenone. Female subjects generally report male body odor as unpleasant and unattractive, but during ovulation, when conception is imminent, these feelings change, and this change could have a strong impact on mate selection.

Studies have also been conducted on female odors to determine if men’s mate selection is affected in any way by pheromones and scent. In the vagina, aliphatic acids are secreted and their odors vary within the menstrual cycle. Doty used a questionnaire to evaluate the intensity and pleasantness of different vaginal fluids from a complete menstrual cycle (Grammer et al. , 2004). They found that odor at ovulation was both the most intense odor and least unpleasant. In one study, ovulatory fatty acid compositions stimulated male androgen secretion and changed the discriminatory cognitive capacities of males with regard to female attractiveness; males became less discriminating (Grammer et al. , 2004).

In a study by Cutler et al. , male volunteers recorded the occurrence of six socio-sexual behavior – petting/ affection/ kissing; formal dates; informal dates; sleeping next to a partner; sexual intercourse; and masturbation – over a total of eight weeks, which included a two-week baseline (Grammer et al. , 2004). The men added a synthetic male hormone to their usual cologne or aftershave. In general 58% of the pheromone group, compared to 19% of placebo group showed increases in two or more behaviors compared to baseline. Forty-one percent of the pheromone group compared to 9.5% of the placebo group showed increases in three or more behaviors compared to baseline. In a separate study by McCoy and Pitino, 36 female subjects recorded the occurrence of the following socio-sexual behaviors – sexual intercourse, sleeping next to a partner, formal dates, petting/affection/kissing, and male approaches – over a two-week baseline followed by a six-week span where they applied a synthetic female pheromone. In terms of percentages, three or more socio-sexual behaviors increased over their baseline in 74% of pheromone users, and only 23% in the placebo group (Grammer et al. , 2004). The high percentages found in both research groups, give a positive account that pheromones do, in fact, impact humans. Even with this research, there is some dissension among the researchers regarding whether pheromones actually influence our mate selection.

How Does Mate Selection Work?

Mate selection is a task of information processing. Evolution favors individuals who are able to quickly and reliably process information that allows them to make the appropriate mating decisions (Grammer et al. , 2004 p. 140). It is often hypothesized that since neither males nor females can adequately determine when a female is ovulating, women are able to “trick” men into staying in a relationship. Because males are unaware of females’ fertility, men are more or less forced to remain with the same mate until they are confident impregnation has occurred. If a female were to provide cues as to when she was ovulating, it could make finding a helping partner more difficult (Grammer et al. , 2004).

Some researchers and scientists believe that hidden ovulation gives women the upper hand in the mating world. Other researchers believe that women are seeking good genes during the mating process. Pheromones attribute to this theory. According to some studies, women seem to prefer the odors of immunocompatible men, meaning that each part of the couple donates immunity that the other partner does not donate. This gives the offspring more of an opportunity to survive after birth.

While the mating system of ancestral hominids is unknown, it is likely that during hominid evolution there was at least some male investment in mating and offspring upon which natural selection has shaped modern human mating behavior (Cornwell et al. , 2004).

Can Humans Interfere with Pheromones?

In regards to pheromone production and reception, there are two modern factors that researchers are concerned with: oral contraceptives and our Western obsession with cleanliness. In two studies conducted by Claus Wedekind and Sandra Furi (1997), female pill users tended to choose pheromone scents that were more aligned with their own MHC. Since the partners share the same immunities, the risk of inbreeding increases. Wedekind & Furi (1997) hypothesize that the reason pill users’ pheromone detection is impacted is because the pill is mimicking pregnancy. He also believes that pregnant women have different aims when it comes to mate selection; they are aiming for a “helper” during and after childbirth.

Another concern of researchers is our obsession with bodily cleanliness. Wedekind & Furi (1997), through their research, are convinced that even though we are obsessed with cleansers, perfumes, and deodorants, nature still functions. Our nose and olfactory glands are stronger and more robust than originally thought to be – still giving nature the ability to help chose our life partners so that our offspring has the best chance for survival.